According to US National Park Service, there are over 2000 natural arches in Arches National Park. Although one can make it a mission to cover as many arches as possible in one day, our time in the park was cut short by a road closure.

So after a rewarding morning hike to the iconic Delicate Arch, we hopped back into the car and followed the road to Devil’s Garden Trailhead.

Landscape Arch is just a 0.8-mile hike from the trailhead. The trail meanders through sheer walls of sandstone fins – formed when vertical cracks in a thick layer of sandstone were eroded and pried apart by water. 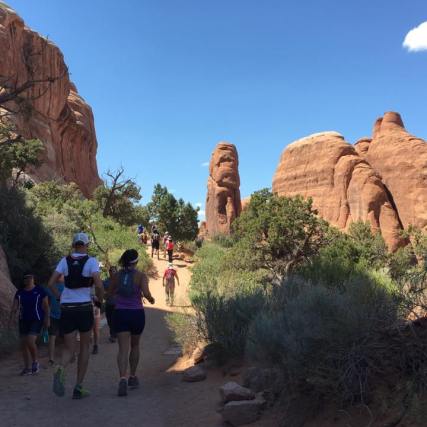 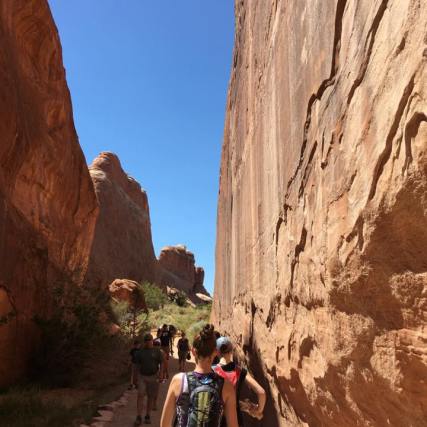 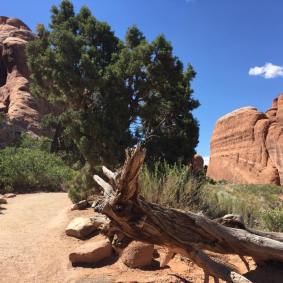 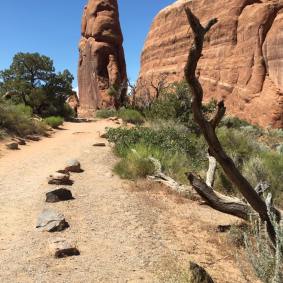 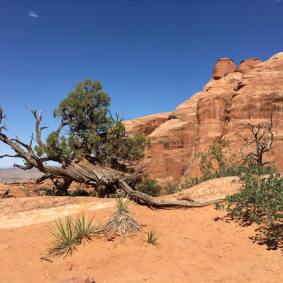 Wild flowers and Pinyon trees do their best to survive the fragile and ever-changing environment. 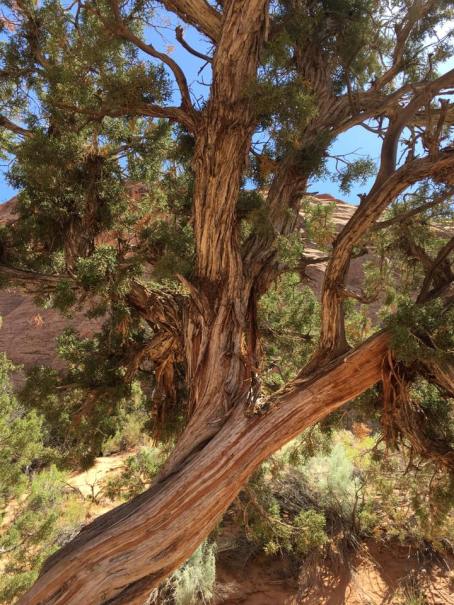 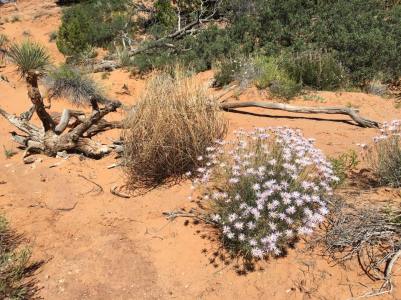 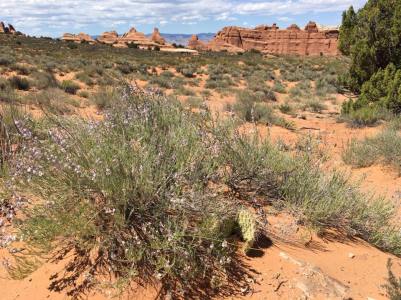 Landscape Arch, spanning 306 feet (93 meters), is the longest arch in North America and fifth longest in the world. 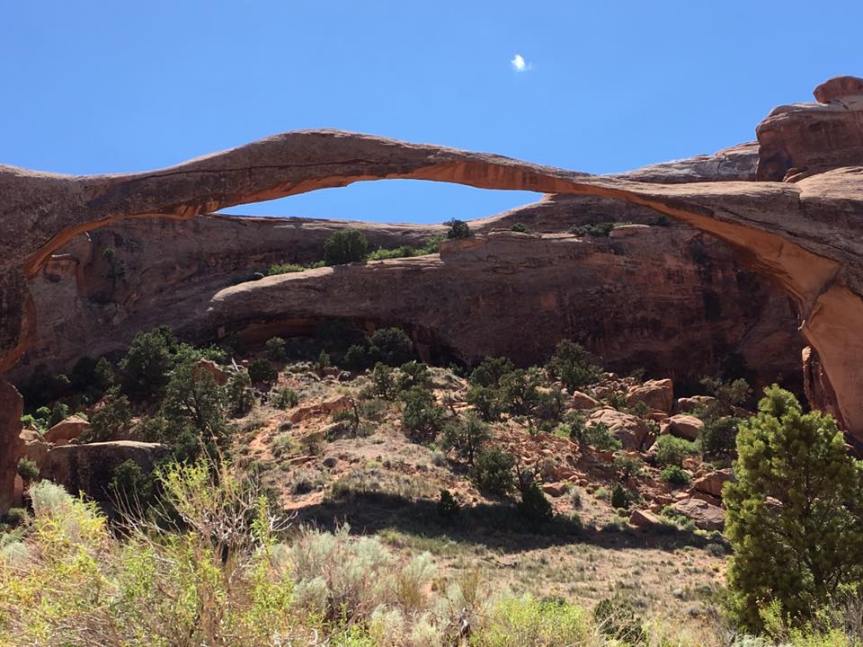 On September 1, 1991, a 73-foot slab of rock fell out from underneath the thinnest section of the span. This event was captured on video by a Swiss tourist who happened to be behind the arch at the time. The large boulders underneath the arch are remnants of the fall. 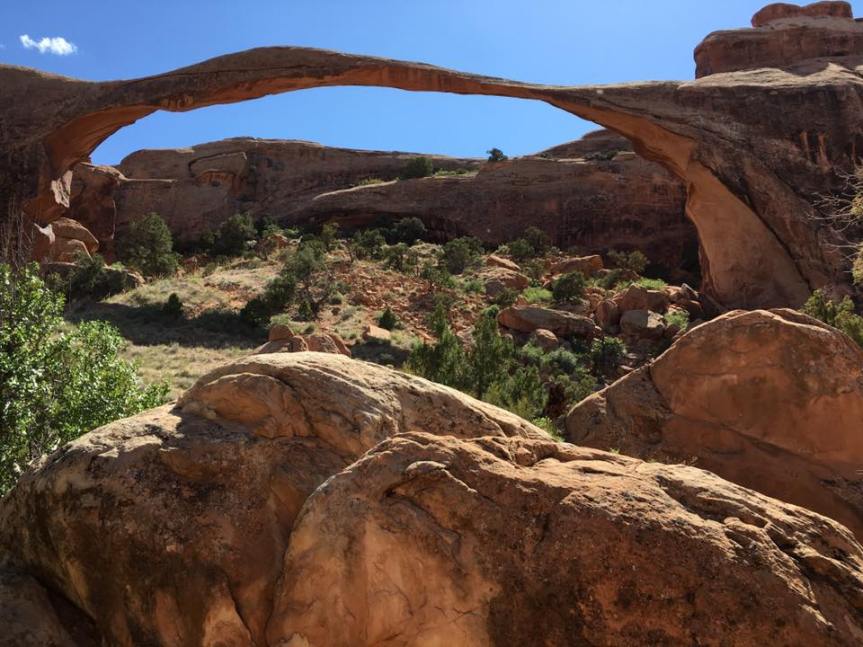 There are several other arches at Devil’s Garden. However, beyond Landscape Arch, the trail becomes steep with slippery surface. Given the time constraint, we decided to turn around and visit other park attractions instead. 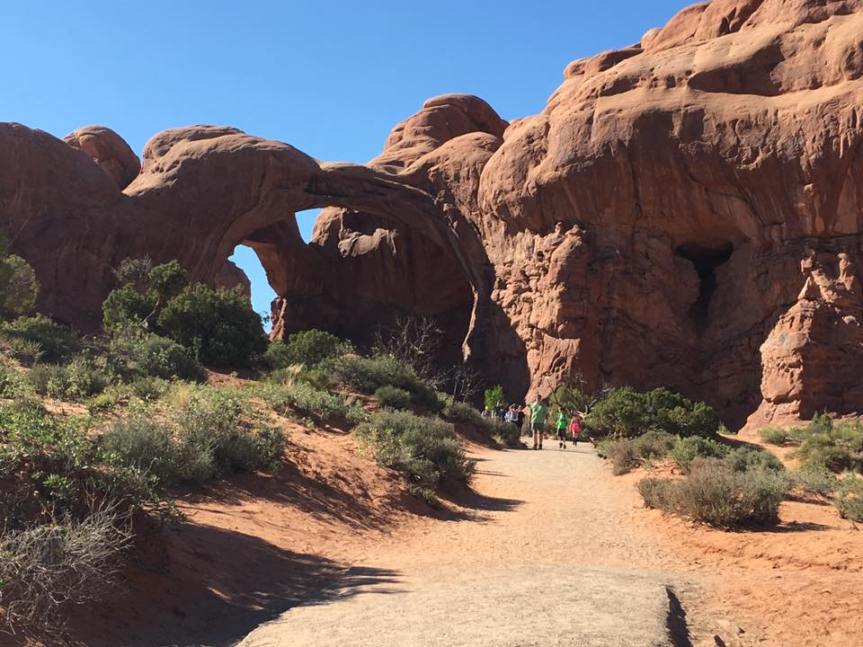 The Windows Section is considered one of the most scenic areas of the park and its three arches are easily accessible from the parking area. 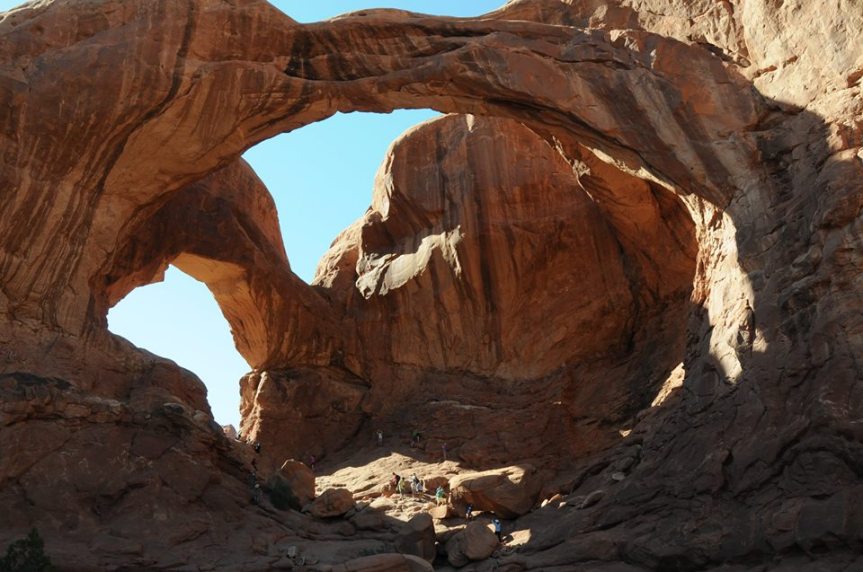 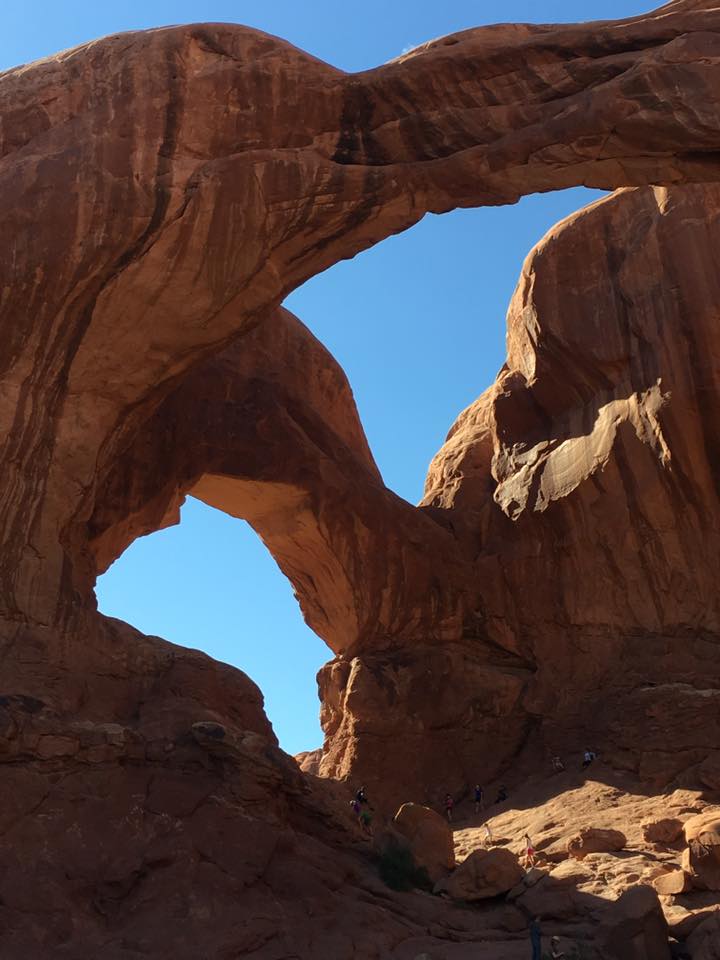 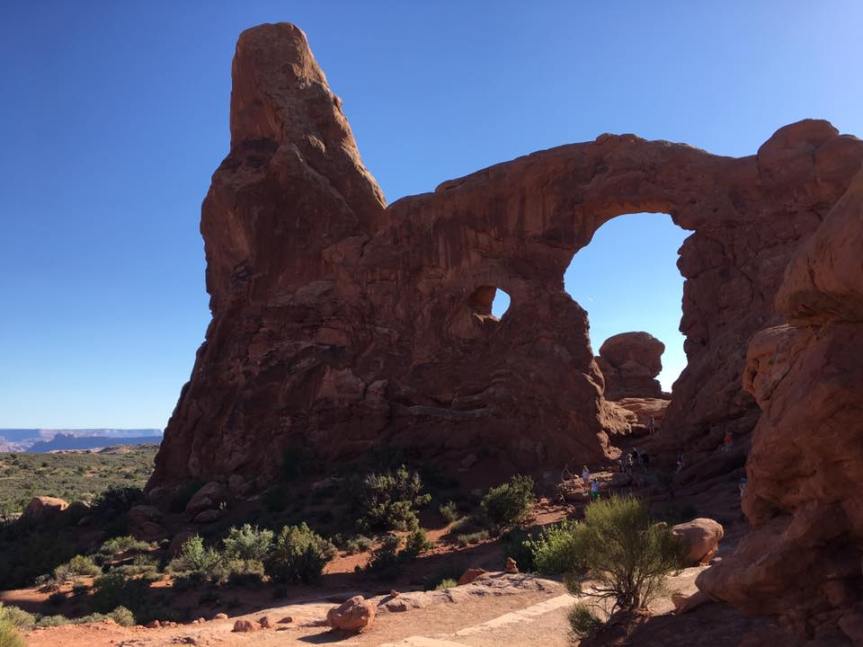 And North and South Windows 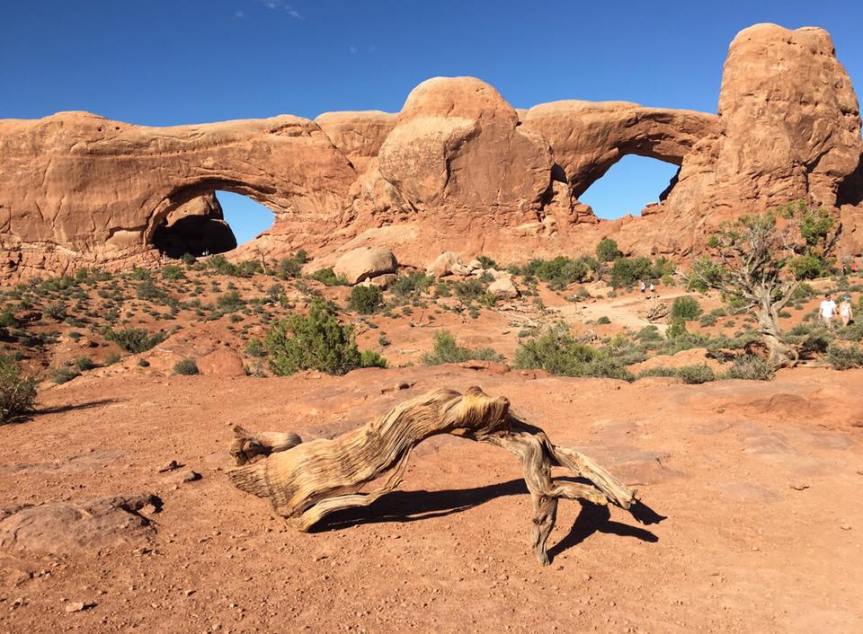 require a moderate climb up a gravel path. 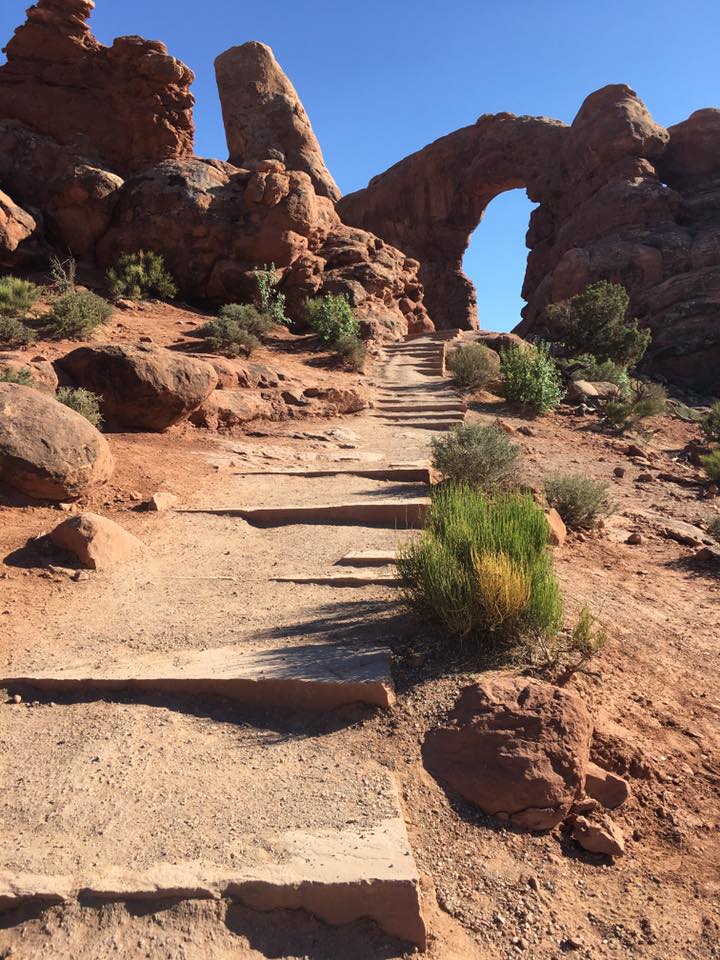 But it is short and do-able even with the heat. My Australian friends were a bit surprised by all the sun-exposed/bare skins from mostly American tourists. Apparently skin cancer education is a big deal in that part of the world. As to me, I was glad that I brought my umbrella. It may not look cool, but it provided me with the shade necessaire 🙂

So there you have it, our 9 plus hours at the Arches National Park!

And did I mention, this really cool Balanced Rock? 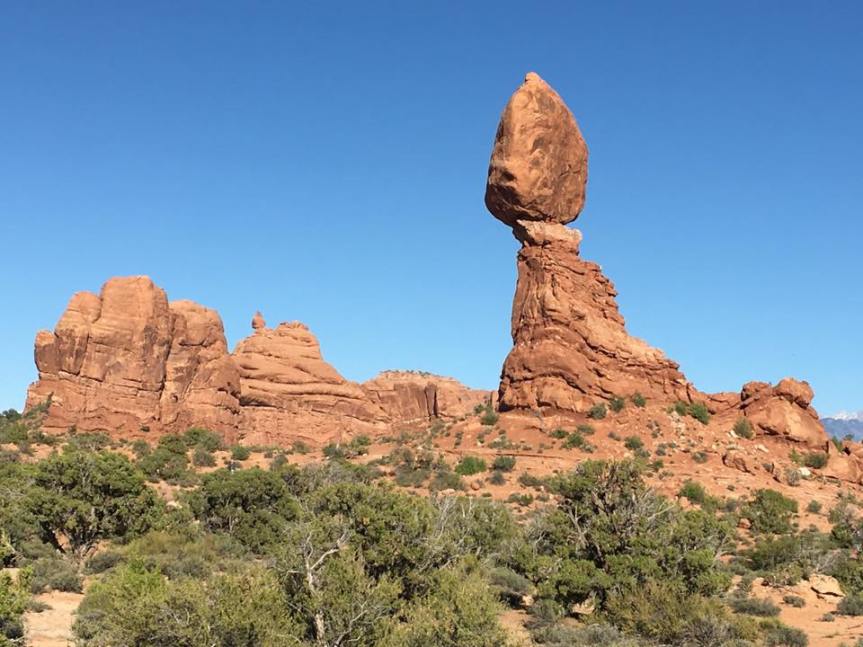 It is only a matter of time before the large boulder comes tumbling down. You must see it before too late!