Back in Osaka, I said goodbye to my friend Johanna and went to the Kansai Airport to pick up my parents. 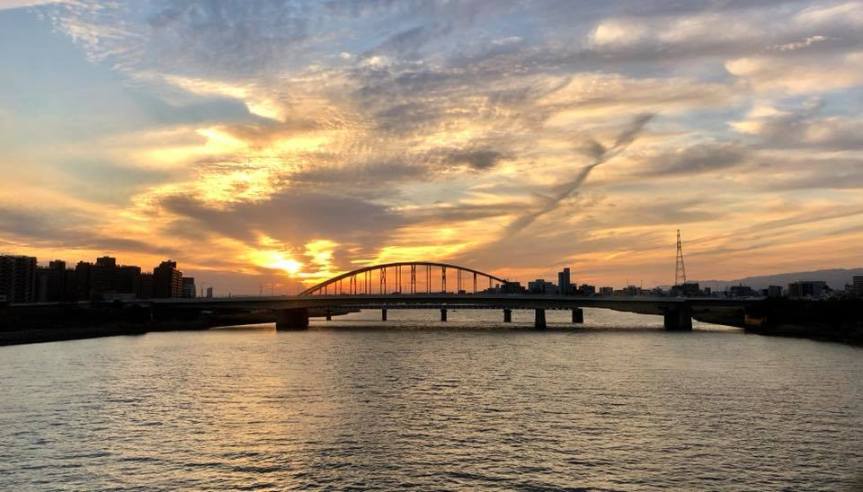 For the upcoming week, I would be showing them my favorite city in Japan, in all its autumn glory. 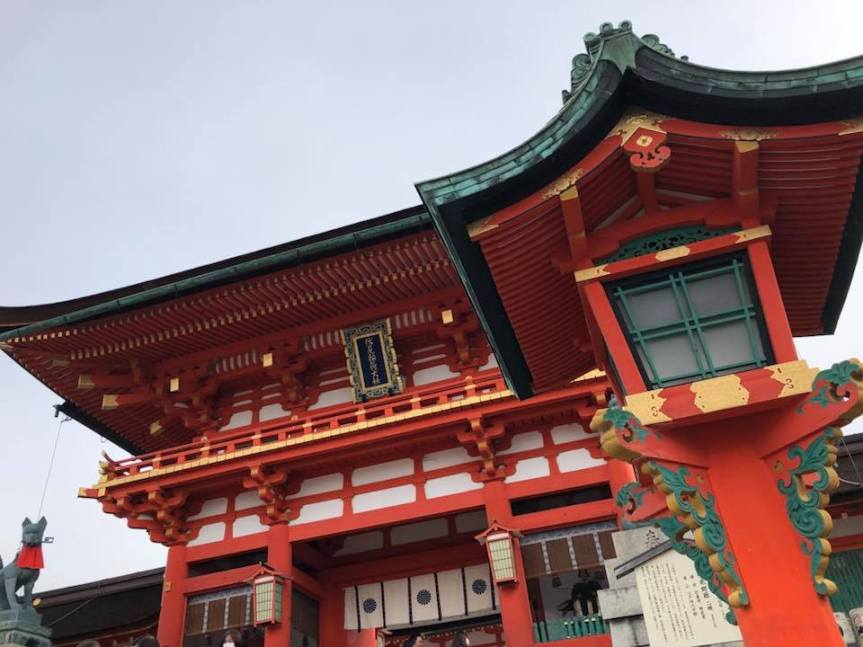 Our first stop was Fushimi Inari.

It’s been years since I last visited this shrine. Now having been voted the #1 sight in Japan by Tripadvisor, the ground was as busy as ever. 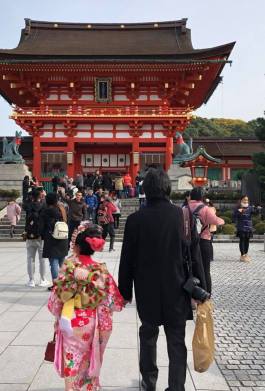 My parents were fascinated by the colorful Japanese costumes so we had fun photographing them. And the leaves, though a bit premature

After enough crowd jostling, we decided to have lunch.

That was when we spotted this guy and his eels.

“One person one order” – He shouted as we were ushered into his small restaurant crammed with foreign tourists. I had the sudden urge to leave. But – considering the parents – stayed put.

The food was nothing to write home about. Although the price and service warrant a mentioning. The Unagi don-Kitsune Udon soup set costs 2100 yen, which, without knowing the quality of their eels, tops the prices of any grilled eel lunch set I’ve had in Japan. 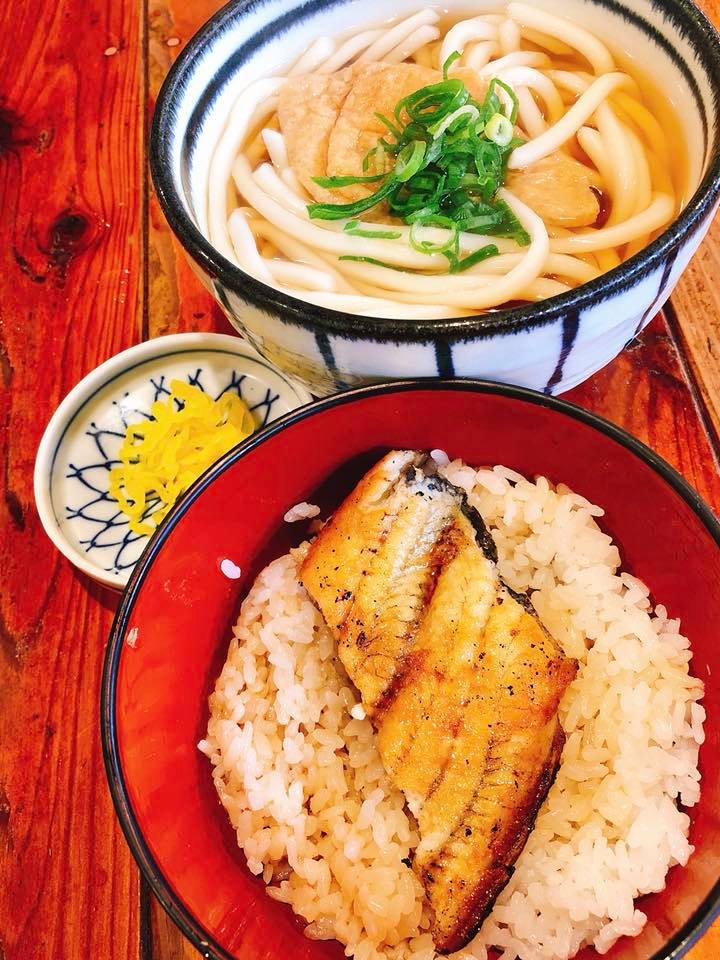 Not to mention that the restaurant’s signature dish is actually these rice stuffed fried tofu skins called Inarizushi. 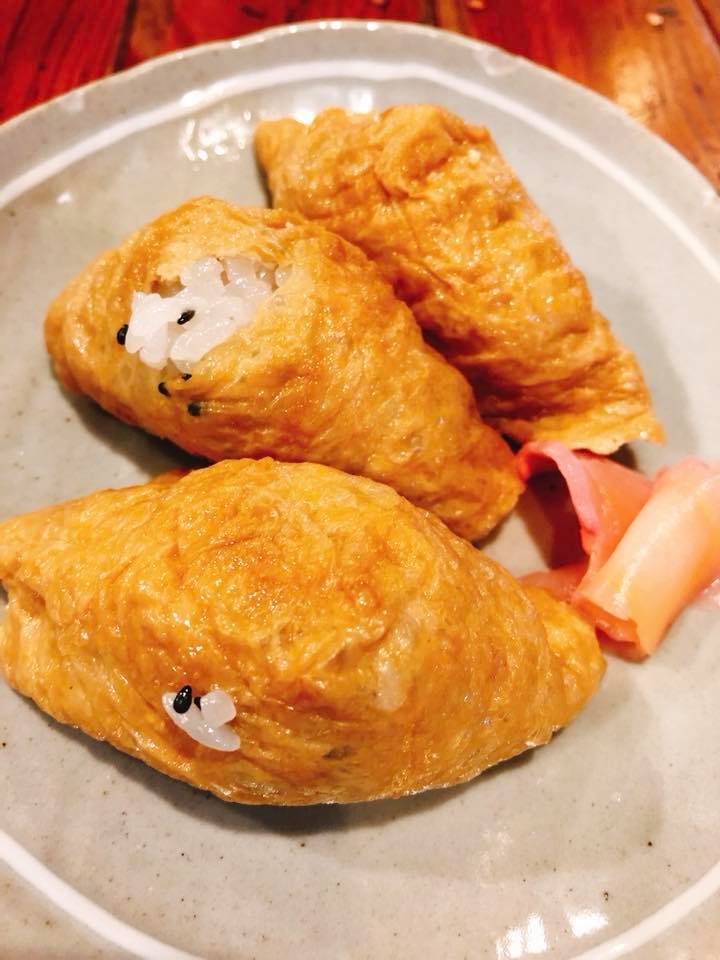 They were good, as good as rice stuffed fried tofu skin sushi could be. A little further down the street you will find many interpretations of this dish. After all, this is the Fushimi Inari, where the deity fox’s favorite food, originated.

As soon as we finished our food, the server cleared the table and rushed us out. Now I don’t want to fault a restaurant for maximizing their business. It is fair to say, that I won’t be eating there again. If you do decide to eat there, however, stick with the inarizushi and mind the rules that they strictly enforce.

After lunch, we took the train to Tofukuji.

There were many cute temples and tea gardens (some serving lunch) along the way. We particularly loved this one.

Tofukuji is famous for their autumn foliage and people from all over Japan come here to see it.

The colors had peaked during the past week and they were spectacular! 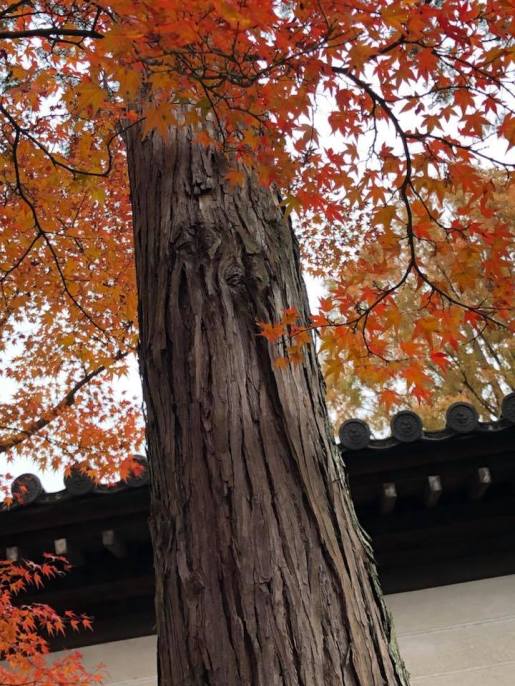 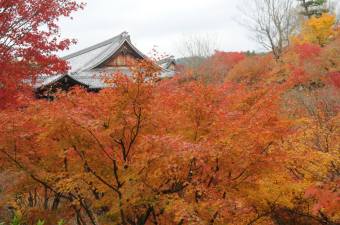 There were long lines to access and on the Tsutenkyo Bridge. 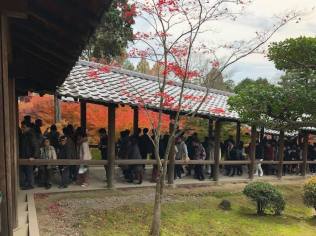 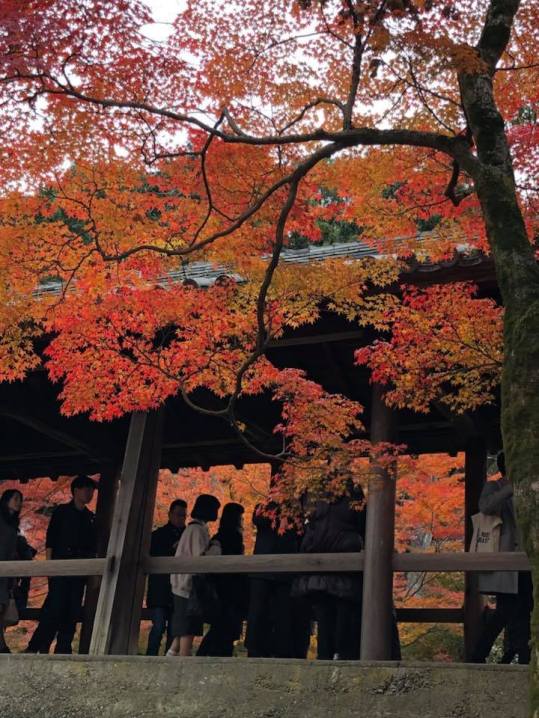 And that was where I lost my mom. Dad and I went back and forth several times to look for her – which was not easy to do given the amount of people – but she was nowhere to be found.

We decided to get off the bridge, then we saw her – that little lady sitting among a group of Japanese little ladies, resting on a stone bench dangling her feet in the air. We would have been more upset if she also had an ice cream cone in her hand.

For dinner, we had eel again in one of the specialty restaurants in the department store Kyoto Maru. 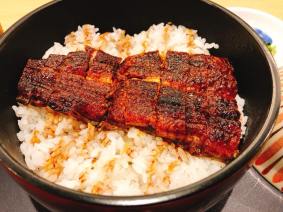 This time, the food was good and the price reasonable. More importantly, we were able to relax, sip our tea and reflect on a glorious autumn day we spent in Japan’s old capital.